Since there are millions of colors we can see, it makes sense that we wouldn’t be familiar with all of their names. For most colors, we use the colors of the rainbow and the words “lighter” or “darker” to describe them. Yet, most colors have a name associated with them, even if it’s not universally known.

This article will take a look at some of the most unique color names out there, and it’s unlikely that you’ve heard them before. Even if you do know some of these colors, there are probably thousands of others out there with unfamiliar and unusual names, such as the ones with funny, silly, and weird color names or the worst named colors of all time.

The following 26 color names are so unique that out of context, you might not realize they’re referring to a color. Perhaps some of these colors will appeal to you, and you can use them and their peculiar names in some designs.

Phlox is a type of plant that’s comprised of bunches of small flowers that are found in North America. The flowers can be pink, white, violet, red, or pale blue. The color phlox is named after the pink/purple of some of these flowers.

Atrovirens is also the name of a type of coniferous tree. In Latin, the name means “dark green,” which is the color of the pyramid-shaped plant. However, the color refers to a deep teal instead.

The definition of sarcoline is “flesh-colored,” which explains why it’s similar to a pale skin tone. It’s a mix between peach, yellow, and beige. While it works well as a makeup color, it might be a bit unusual on clothing.

Eburnean is a name for something that resembles ivory. It comes from the Latin word eburneus, which has the same meaning. It’s an off-white color that’s created by adding a touch of yellow to white.

Feldgrau was the official color for military uniforms for the German Army during World War II, and it’s still a common military color today. The name means “field gray” in German, describing the green hue that has hints of gray.

Falu can be described as deep red or crimson. It’s named after the Swedish city Falun, which is where it originated. Residents of Falun used copper-mining by-products to make red paint of this shade. The color is commonly used for barns in Sweden, Finland, and the Balkans.

This green tone is named after the Latin word for emerald, smaragdus. Yet, the peculiar name isn’t quite as pretty as the gemstone is. A similar shade of green known as emerald won the 2013 Pantone Color of the Year.

Watchet is believed to be named after the town of Watchet in England because the cliffs around it look light blue due to the alabaster rocks. It can be described as a slightly darker sky blue.

Fulvous is a yellow/orange color that’s like tawny or butterscotch. It might come from the Latin word flavus, which means yellow. If you study animals, you might recognize it as the color used to describe some duck species, such as the fulvous whistling duck. However, those birds look more brown than orange.

In this context, xanadu describes a gray/green color. Yet, it’s also the name of a Mongolian city and a musical movie that flopped in 1980. It’s the color of some of the beautiful rock carvings in the city of Xanadu, which is more commonly known as Shangdu.

By definition, the color damask is “red/gray.” However, the name can also be used to describe a woven fabric or a damask rose, neither of which directly correlates with the red tone. Darkening the hot pink hue of the rose may give you a color close to damask.

The name skobeloff is quite a mouthful for a type of teal. It can be described as a dark color of the sea. When you pick out blue-green items, they may actually be skobeloff.

Wenge might be a familiar color name if you were recently furniture shopping because it’s sometimes listed as a table color. It’s a dark brown that’s named after the wood of the endangered millettia laurentii tree in Africa. The color is pronounced “wen-geh,” not “wenj.”

Amaranth is the name of a perennial plant that shares this red/pink hue. The name comes from the Greek word amarantos. It means “everlasting flower” because tales say the plant grew on Mount Olympus and never died.

Vantablack is one of the closest colors to black without being solid black. A group named Surrey NanoSystems created this color to help them with space exploration. A vantablack pigment is the darkest man-made substance in the world because it absorbs almost all visible light. The name is also used for a brand of super-dark coatings.

Sinoper, also known as sinople, was commonly used by Renaissance artists. In the paintings, the pigment contained an iron-rich mineral known as hematite, which gave the color a rusty red appearance. It originated in Sinop, Turkey, which is where the pigment was first imported from.

Not only does zaffre sound like sapphire, but it also has a similar color. It’s a dark blue pigment that was used in stain glass during Victorian times. The word zaffre also refers to impure cobalt oxide, which is what was used to give the stained glass its blue hues.

Puce is a mix of purple and brown, which usually ends up with a dull or muddy pink color. Sometimes, it may be represented as red. “Puce” is also the French word for flea, despite fleas being brown. However, like puce, fleas can also be seen as red at times because of the blood they ingest.

Smalt is almost identical to zaffre at first glance. The name comes from blue glass that has the same name. Glass of this color can be created by melting potassium carbonate, silica, and cobalt oxide and fusing them together.

Burlywood is another color you might see associated with furniture. It describes wood that’s light brown or sand-colored, similar to khaki pants. Burlywood looks great next to its complementary color, light cobalt blue.

Verdigris is the color that describes what copper looks like when it naturally oxidizes and turns green, such as how the Statue of Liberty appears today. The color was named in the 14th century after the Anglo-French word, vert de Grece, meaning “green of Greece.” In Ancient Greece, people would purposely seek out this green color by exposing copper plates to hot vinegar when in a sealed container.

Titian is a brown/orange color, named after Italian artist Tiziano “Titian” Vecellio. In his paintings from the sixteenth century, he used this color almost every time he painted women’s hair. One example is his “Madonna and Child” painting.

Gamboge is a yellow-brown color close to mustard. However, it’s also the name of a similarly-colored pigment from the gum resin of some trees in Europe and Asia. The pigment is often used to dye the robes of Buddhist monks.

This purple hue is named after cattleya orchids, which got their name from William Cattley, a patron of botany. Cattley had an obsession with orchids during the 1700s, and his enthusiasm rubbed off on many people. Some cattleya orchids are this color, but they can also be yellow, lavender, white, and pink.

The name incarnadine comes from the word incarnate, which means “having a bodily form.” Thus, it’s sometimes used to describe a flesh color, but it’s more common as a mix of red and brown. That’s because, in Shakespeare’s Macbeth, incarnadine is used to describe something that’s blood-red.

Nattier is a pale blue color that’s named after Jean-Marc Nattier, a French Rococo artist in the 1700s. He was known for painting portraits, and many of them used this color. His painting nicknamed “Portrait of a Lady in Blue” is one of the most notable pieces.

If every design was made using only the colors of the rainbow, life would be repetitive and chaotic. Luckily, there are millions of other colors in the world, including tints, shades, and mixtures of those colors.

Most of the colors we see are ones we’ve never heard of, so we might use them without knowing exactly what they’re called. Now you know a few unique color names that might add an interesting flare to your decorations and art projects. 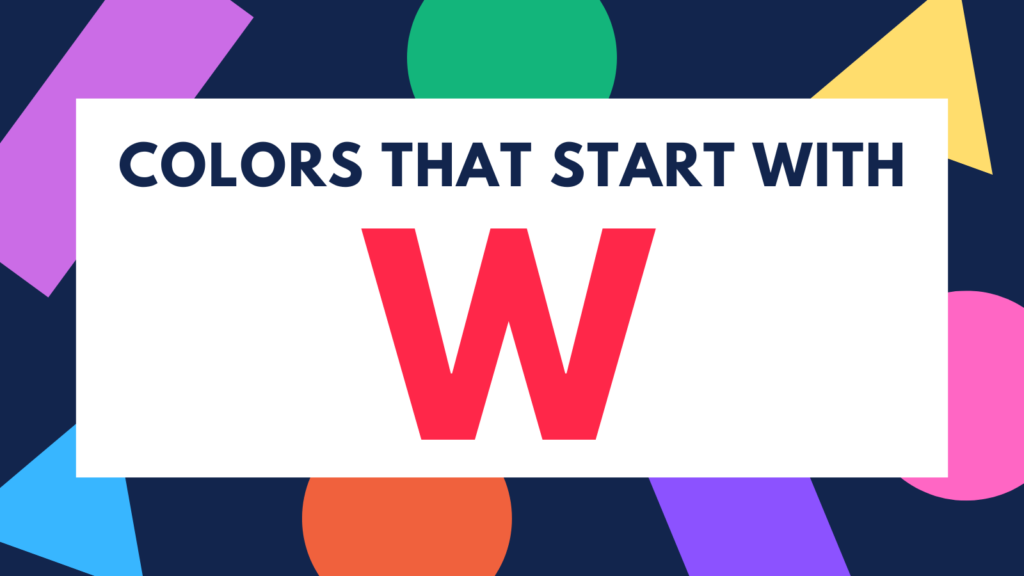