Feathers are a form of symbolism in almost every culture across the world. Different types of feathers are also known to represent different things. The same is true for colors. The beliefs of the culture will determine both the value and meaning of each one.

A white feather has many meanings and variations depending on where you are in the world and what your belief system is. When you look at the different variations, you will begin to see patterns that connect many of the meanings.

What Is the Meaning of a White Feather?

If you happen to find a white feather and want to know what it symbolizes, here is what it might mean:

White has been a symbol of purity for centuries. It is believed to be the color that is most associated with God. People who practice piousness are often clothed in white. In the Catholic Church, a white dove was often used as the symbol of forgiveness and friendship. White feathers given from one person to another are often a sign of friendship and trust. It is believed that when a white feather is offered, in almost any culture, a person has only the truest intentions. Purity is a symbol of the highest grace in both religious circles as well as in secular areas.

In certain areas, a white feather may be considered to be a sign of peace. Much like the white dove bearing the olive branch, white feathers can be seen as a peace offering or they can represent the bearer of a peaceful solution. White flags often fly over neutral territories. If someone wishes to come in peace and only wishes to have a friendly encounter, they may bring a staff with white feathers attached to it as a sign of peace. Giving white flowers to a friend after an argument may also be a peaceful gesture. No matter what material is used, feathers, cloth, or flowers, white will continue to be a sign of peace.

The use of white can be slightly different from country to country and religion to religion. Understanding what each group’s religious beliefs are will help to clarify what the color white represents to each one. Love can be represented by many different colors. White, in most cases, is used to represent the truest, most sincere forms of the emotion.

Hope is the belief in all things inherently good. White has been associated with hope since Biblical times. Priests wore white. Altar cloths were white. Most religious or spiritual events that involved the combination of hope and faith had some element of white attached to them. Candles, attire, banners, feathers, and floral decorations all were symbolically made in white as a symbol of hope for the future.

Even when it comes to secular events, white is often included in ceremonies where the belief in hope is at the forefront. Hope is an everlasting concept based on belief in God and spirit. With both God and Spirit being represented by white feathers and flowers, it stands to reason for many that white would be a universal color for hope.

For those who believe in heaven, white is the most common color associated with the heavenly realm. White clouds, angels with white wings, doves with white feathers, and angelic beings dressed in white are associated with heaven and the state of grace that is achieved when a soul enters through the pearly gates. Certain passages in the Bible also associate the color white with the state of grace given to those who are deemed worthy enough to enter the gates of heaven.

All of the winged creatures in heaven, including the angels, are adorned with white feathers, possibly as a sign of grace or attainment of some level of divinity. The color white, when used in association with heaven, may indicate a state of grace or divinity given by God himself.

Angels from heaven are almost always depicted with white wings. Dark angels from the underworld, on the other hand, are often depicted with black or dark gray wings. Depending on what view one takes of the angels, some see them as not wearing any clothes besides a small cloth around the hips. Others may envision the archangels in full battle gear. No matter how you see them or in what form, the one thing that is always uniform is the fact that they have white wings.

Depending on the type of angel being discussed, some have very small wings with very short feathers. Others have large voluminous wings with long, flowing, very powerful feathers that allow them to take flight. Again, even though the size of the feathers and wings may differ dramatically, they are almost always white. The only time there is a deviation is when the angels being discussed are from the underworld.

White is also a color associated with protection. The Knights Templar wore white tunics with red crosses. While the white of the tunic was primarily intended to represent purity, it also represented protection against the Templar enemies. White is also considered a color of protection in many different churches as well. Spiritual healers often call upon the white healing light to enter a person and hasten the healing process.

People who strive to communicate with spirits often employ white in the form of feathers, candles, flowers, and altar cloths as a way of signaling peace and friendship. Spirits are believed to be drawn to bright white light. People who try to communicate with them use white as a beacon to draw them in. Using a white feather to fan the smoke of incense is another tool that is often used to “stir up” the air and keep the energy flowing throughout the room.

Spiritual beings or ghosts are often said to appear as white mists or ethereal forms. While each person may offer a different account, the majority claim to see most spiritual entities in white or clutching something made of white.

In times of war, raising a stick with a white cloth or feathers attached was a sign of surrender. In some cases, it was also considered to be a sign of pacifism. For many people, this is looked at as a sign of cowardice and unwillingness to stand up for themselves or others. Although each situation was different, many people continued to look down on those who wore white during wartime. They also looked at any type of willful surrender as a sign of weakness and defeat.

There is nothing wrong with being a pacifist or surrendering during battle if you feel that those actions are the ones that are right for you in the moment. No one else can make the decision for you. Instead of looking at a white flag as a sign of defeat, it can also be looked at as a sign of perseverance and self-preservation. White may also be seen as a sign of courage during adversity. Who knows what will await someone who chooses the path of surrender?

The Many Meanings of White

White feathers or any other white item can have many different meanings. It can be difficult to decipher the meaning of a color and an object unless you know the belief structure of the person who will be using the item. The color white when it is associated with feathers can have multiple meanings. Look beyond the person to find their belief system. If you are considering using the color white in an event or activity, ask yourself what it means to you. What does a feather represent? Do your research and be creative!

How you perceive a white feather is up to you. Look at your beliefs and find what works best in your mind and use your intent to make it happen. Colors and objects only have the power and gifts you give them, so take a few minutes and think about what a white feather will mean to you. 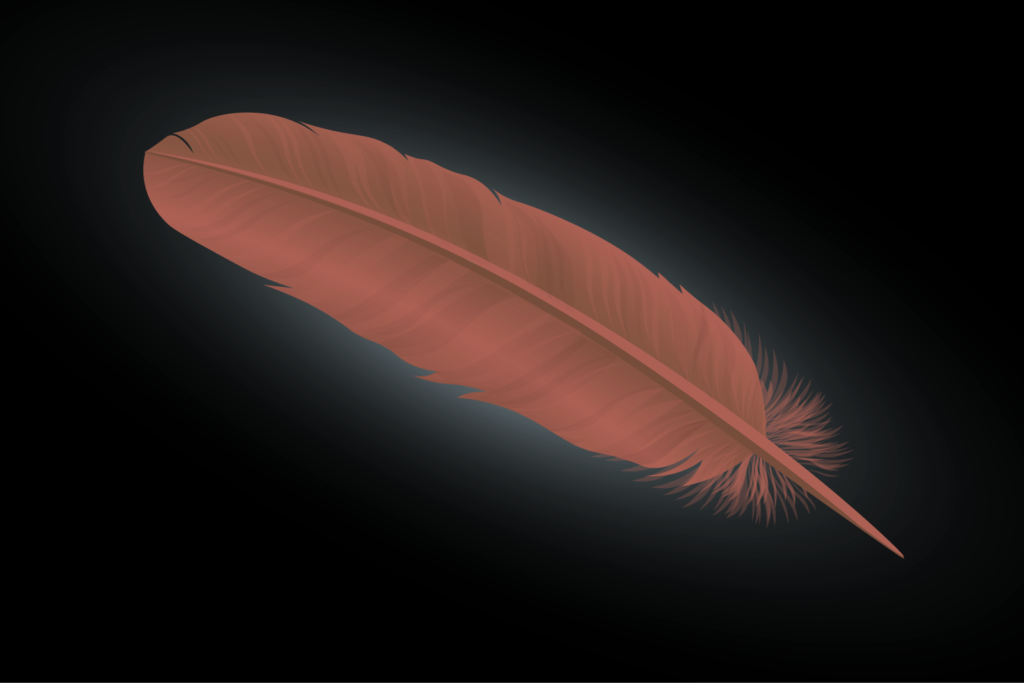